As we consider the ‘big picture’ of these chapters in our study of 1 Samuel, we note:  God speaking, God’s presence, the terror that brings, and the key phrase “Glory is exiled from Israel” (Ichabod).  The terror is felt by the Philistines, at the prospect of God’s presence being near; the terror is also felt by Israelites at the prospect of God’s glory leaving, and not knowing when they will be in His presence again.

(Read Luke 7:30)  Eli had not honored God, and had not cared much when his sons did not honor him.  They had not fulfilled God’s purpose for priests. Eli had made sure to sit in a seat of honor himself, but had not fulfilled his priestly duties of ushering others into God’s presence and showing them His glory.  Eli’s rebuke of his sons was lame, not real.  So a man of God came to tell him so.  Eli is held responsible for not honoring God or training his children in righteousness.  His two sons are held responsible for rejecting God’s purpose for their life.  They sinned, and God is Sovereign, and we will see that play out in this history narrative.

Vision: It should be noted that the prophetic “vision” is used for the divine message communicated to the prophets, and the message was usually to be delivered to the prophet’s audience orally in words.  But, sometimes the vision was directed to be “written down” (Hab. 2:2).  In Amos 1:1; Mic 1:1; Isaiah 2:1; etc., the “vision” is recorded in words.  Thus, in the biblical prophecy the “vision” was something to be explained or expressed in words, and its message is more important than the visionary experience of the prophet itself.

In this dark time of Israel’s history, the Word was scarce; the priests who ought to have taught, bringing the words before the people failed to do so.  Likewise the people who should have been rehearsing and recalling and discussing these words (see Deuteronomy 6 and 11) forgot them, and did what was right in their own eyes without a care for who God was, how He created the world to be, the relationships He desired His people to enjoy, or the purpose for which He created them (for His own glory!).  They forgot.  The word was scarce, the visions were infrequent.  (see Psalm 106). 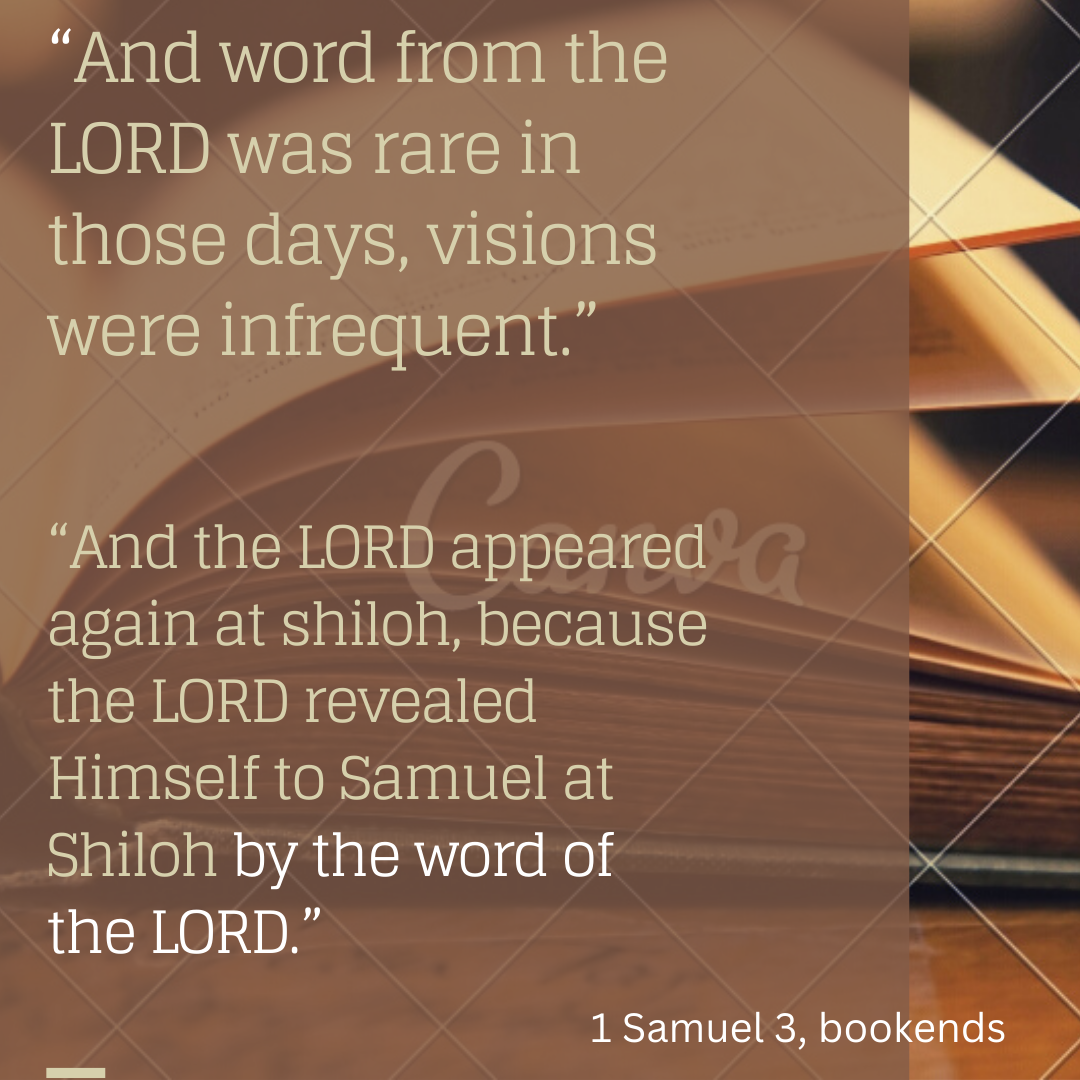 Vs. 3, dark and light  Eli could not see, yet there is light, and Samuel receives a vision, the Word of the LORD.  YHWH calls out to Samuel, neither he nor Eli know what is happening.  On the third call, Eli realizes Samuel must be hearing a real voice, and that voice could only be YHWH.  This is a call that we never see Eli receive.  The boy, Samuel, responds “Here I am.”

Eli intimidates Samuel the next morning, threatening him if he should not tell all that he knew.  Samuel did not hide, but told Eli of the coming judgement. Think of how hearing from YHWH must have strengthened Samuel, that he could answer without fear.  How does Eli react? “And he said, “He is the Lord; let Him do what seems good to Him.”

Is he feeling defeated? Dejected?  Depressed?  When does this resignation come out in us?  How do we express it?  Or do we stuff it and stoically claim to understand?  There is no “fine, whatever” in a “before YHWH” life.  When we live “Coram Deo” how do we respond?

The Ark represents the presence of God.  (Exodus. 25)  4:1-10 ironic.  They use the Ark to make God work for them, so that He will show Himself to be a mighty warrior for them.  So close to the truth, why are they off?  This attitude comes out again later as they demand a king, here they do not verbally demand, they turn the Ark rather into an idol, a remote control for their God.

Instead of fighting for Israel, God lets the Ark be captured.  Poythress says in his book Theophany: “It manifests the holiness of God.  God does as He pleases in connection with the presence of the ark–and woe to the person who does not respect his holiness!”  So the Ark is stolen into Philistine custody.

The same tendency is in our hearts, seen variously in different times and places.  Consider the Crusades, when knights carried trinkets (the tooth of a saint, a bit of cloth allegedly ripped off of the virgin Mary’s robe…). Perhaps we consider ourselves above this temptation, but our trinkets and idols are invisible; we still try to manipulate God.

News of the battle reaches Eli, and he falls backward in his chair and dies. News reaches his daughter-in-law, who goes into childbirth, names her son Ichabod, makes a bold statement and dies. They were both, lately, grieved that the glory of God may depart, that God’s presence was not longer guaranteed.

Eli’s daughter in law dies, more grieved over loss of Ark than loss of husband.  Ichabod could mean “Inglorious” but more probable “Where is glory?”  “Alas for glory!”  “She inscribed the national catastrophe in her son’s name and then dies.”  (Robert Alter, The Story of David, 25)

I am indebted to the Hebrew scholar Robert Alter for explaining this Hebrew word picture that escapes us if we only ever read the English words.  “The term for ‘glory’ kavod is transparently cognate with kaved, ‘heavy’ the adjective used to explain Eli’s lethal tumble from his chair–the leader who might be supposed to represent Israel’s glory exhibits only deadly heaviness.”  (Alter, 26)